Environmental impact and sustainability are hot topics these days – and for good reason. Companies across various industries including agriculture, automotive, and energy have the potential to save billions of dollars and prevent further pollution by adapting their manufacturing methods to be more environmentally friendly, not to mention the effects some changes could have on human health.

For companies in the manufacturing sector, regulatory compliance is required for continued operation. These companies must report on their operations’ environmental impacts in accordance with Title 40 of the Code of Federal Regulations (CFR). Topics regulated by 40 CFR include air, pesticides, waste, and water. Enforcing these regulations is a central part of the Environmental Protection Agency’s (EPA) responsibilities of protecting human health and the environment.

While companies should always be aiming to make their processes more efficient, this doesn’t simply mean spending less time or money during production; it should also consider reducing the negative impacts the manufacturing process may have on the environment surrounding and affected by the production facility. Even if not legally required, producing environmental reports and making them readily available poses many potential benefits for a company, such as more desirable marketing and stakeholder relations. Consumers are becoming increasingly aware of and interested in the environmental and social impacts of a company from which they purchase goods and services. Utilizing and advertising clean or “green” practices can lead to a much more favorable view of the company as it demonstrates that they take their environmental stewardship seriously and are continuously trying to improve. Additionally, since they are aware of what a positive impact it may have, investors, suppliers, and other stakeholders will also be pleased with the positive impact a company’s operations has on its sales and physical surroundings.

Is regulation done on a federal or state level?

While major federal laws set the floor of what is acceptable, state governments may have their own environmental regulations, which can be supplementary to or have stricter standards than those at the federal level. It’s important to note that while the federal government enacts regulations over the country, each state department is responsible for their local enforcement. This is because some federal-level rulings are very broad, for the purpose of allowing states to decide how strict the ruling should be interpreted and enforced. This state-level tailoring and implementation gains importance when industry and population densities are considered, as these factors vary widely across the country and throughout individual states. While the federal baseline values may be sufficient for a rural area, some states with higher densities require stricter standards to more confidently protect the health of the local population and environment.

What kind of laws are in effect today? 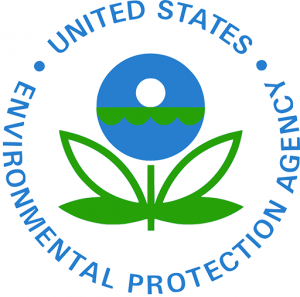 One of the major laws in effect by the EPA is the Clean Air Act (CAA), which regulates the emissions of hazardous air pollutants (HAPs). There are currently 187 known toxic air pollutants, including benzine, found in gasoline, and methylene chloride, used as a solvent. This Act is an example of how certain emissions can be regulated differently on the state level: An exception to the Act’s rules on car tailpipe emissions specifically is enforced by the state of California. This state has been permitted by the federal government to set stricter standards than the EPA and while, in the case of this Act, other states are not permitted to set their own standards like California can, they may choose to follow suit and enforce California’s tighter standards in their jurisdiction.

Another example of state-level intervention resides in the Clean Water Act (CWA). The CWA governs water pollution by aiming to restore and maintain the integrity of the nation’s waters and uses a permit system to regulate point sources (think industrial manufacturing facilities and sewage treatment plants) of pollution. 47 of the 50 states are authorized to issue these permits and, when the baseline standards are deemed insufficient for water integrity protection, the state may add their own water quality-based limitations to their issued permits.

How does a company prove they are complying with a given law?

In short, timely and accurate reporting. For example, to enforce the CAA, manufacturers using materials identified as hazardous are required to report the quantities of those materials that are used in and emitted as part of production. Therefore, generating accurate HAPS reports is essential for a company to prove they are operating in compliance with the CAA. 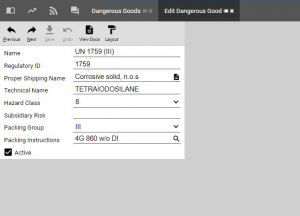 The Environmental Reporting feature in DEACOM supports reporting requirements for emission of HAPS during production, relative to vessel or facility permits, and hazardous contents of products shipped to customers. This feature includes various reports, including the Sales Shipment Detail report, which shows a breakdown of the regulatory materials used, based on the finished goods that were sold to the selected customer. Another widely used report type is the Regulatory Onhand report, which lists all parts identified in the system as dangerous goods and values relating to the maximum daily onhand quantity, average daily onhand quantity, and number of days the part was onhand.

Essentially, these environmental reports can be generated based on Jobs produced or Sales Orders shipped in a specific date range. The reports list all the lowest level components either used in the production Jobs or contained in the products shipped on the Sales Orders, including CAS (Chemical Abstracts Service) level regulatory components. With Item Master user-defined fields able to track the status of components on various regulatory lists, the reports can be filtered to display only those components necessary for regulatory reporting. Various fields on Item Master records, such as the Hazardous Info field and configured User Fields, are tied to Environmental Reporting grids and report outputs to display values for emissions, hazardous contents, and important related details on individual items.

How is DEACOM used to compile and group the data to comply with reporting requirements?

The pre-filter used to generate these reports is especially helpful as it allows users to segment reports by customer, dangerous good, and/or manufacturing facility, to name a few. Using Deacom’s ERP software to generate environmental reports provides an accurate statement of production emissions as well as hazardous materials shipped to customers and remaining onhand. Not only that, it is extremely easy to substantiate the numbers using powerful drill-down capabilities since all of DEACOM operates on a single data set – There is no piecemealing the information together from multiple sources or systems. 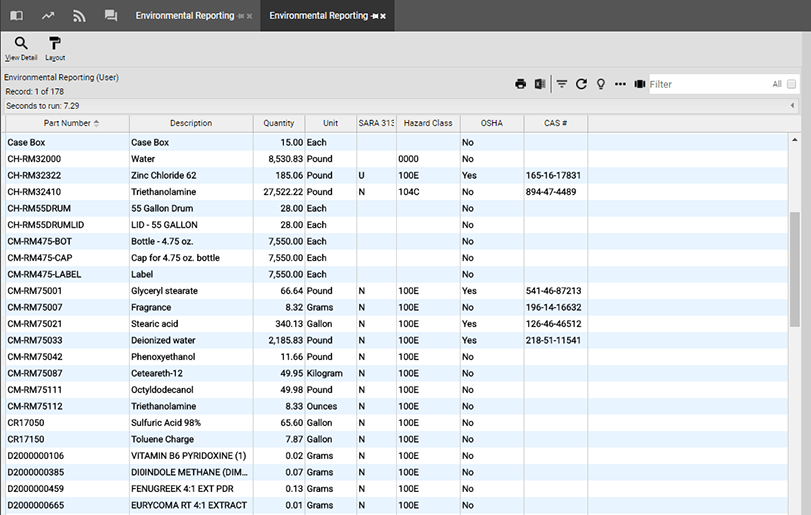 DEACOM’s inherent reporting capabilities mean there is no wait or guesswork in getting these values. Depending on the requirement and using available pre-filters and advanced filters, reporting can be accomplished with one report for the entire company or separated by segment, site, department, or material. While it may not be required by the government, separating reports by department can be easier to understand and digest and can be especially helpful for individual department managers and, depending on how they are shared, the local communities which the operations affect.

If company reports are required on a per pollutant basis, the Environmental Reporting pre-filter options can be used to segment reports. Alternatively, one report may be generated for all operations in a given time frame, then the available advanced filtering option can be used to further limit report details to the segments or items of interest. To facilitate reporting on a regular basis, such as monthly, pre-filters can be saved for quick selection and use.

As environmental effects become more widely broadcasted and noticeable, people will continue to seek products and even employment from companies who practice sustainable processes and take care of their surroundings. Consistently generating environmental impact reports and sharing the results with interested parties can help manufacturers improve their operations and public perception, which in turn can lead to cost savings and increased sales. Following uniform and transparent reporting practices demonstrates that these reports are not just generated due to legal requirements; Rather, the company openly acknowledges and addresses the public’s concern for sustainable practices and products and is working to become a more responsible leader in their industry.